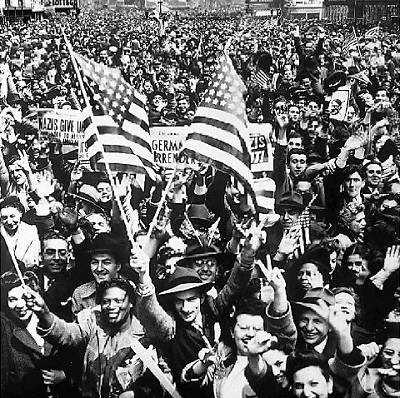 “United in this determination and with unshakable faith in the cause for which we fight, we will, with God’s help, go forward to our greatest victory.” – General Dwight D. Eisenhower

May 8 is the 73rd anniversary of Victory in Europe Day, more commonly known as VE Day or V Day. On that day in 1945 the Allies of World War II formally accepted Nazi Germany’s unconditional surrender of its armed forces.  However, with pockets of fighting between the Germans and Soviets still occurring the next day, it wasn’t until the 9th that VE Day was celebrated in Moscow, when Stalin announced victory over the Nazis on a radio broadcast.

As the war was coming to an end in Europe, many German soldiers were concerned about being taken prisoner by the Soviet forces. Although one million Germans tried to exodus to the West when the fighting ended in Czechoslovakia ended, it was in vain. Approximately two million Germans were taken prisoner just prior to and after the surrender.

Although it didn’t take place until May 8, 1945, the term VE Day existed as early as September 1944, as the Allies anticipated victory.

Germany’s surrender was not signed by Adolf Hitler, who had committed suicide. It was signed by his successor, Karl Donitz.

More than 1 million people in the UK took to the streets to celebrate the end of the European part of the war.

Although it has been 73 years, May 8, 1945 will be a day etched in the memories of those who witnessed almost six years of war. It is a war that cost millions of lives and destroyed many families. Even though it would be several more months until Japan surrendered, May 8 was a day of rejoicing, a day to look toward the future when World War II would end.

Since 1987, Veterans Commemoratives has been proud to honor our Military Veterans who have bravely served in WWII, Korea, Vietnam, Desert Storm, Afghanistan, and Iraq, as well as those who have served around the world in peacekeeping missions.