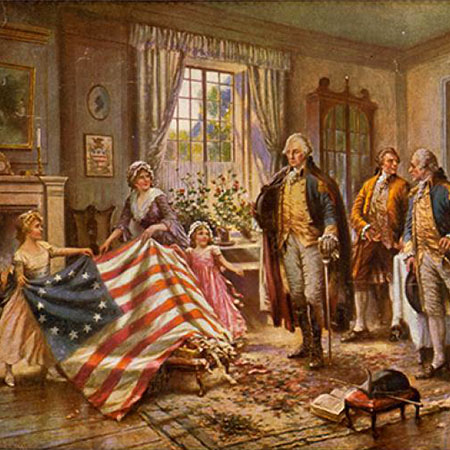 WHAT IS FLAG DAY?

Flag Day is a celebration of the American flag that occurs each year on the anniversary of the flag’s official adoption, June 14.

What we know fondly as the “Stars and Stripes” was adopted by the Continental Congress as the official American flag on June 14, 1777, in the midst of the Revolutionary War. Colonial troops fought under many different flags with various symbols—rattlesnakes, pine trees, and eagles—and slogans—”Don’t Tread on Me,” “Liberty or Death,” and “Conquer or Die,” to name a few.

The Declaration of Independence made the adoption of an American flag necessary. Previously, each colony or special interest had its own flag.

On the 14th of June, Congress made the following resolution: “The flag of the United States shall be thirteen stripes, alternate red and white, with a union of thirteen stars of white on a blue field …” Official announcement of the new flag was not made until Sept. 3, 1777.

Who Made the First American Flag?

The origins of the Stars and Stripes have become part of American folklore. Although many people believe that Betsy Ross designed and sewed the first flag, there is no true proof of this. However, records do indicate that she made ensigns and pennants for the Philadelphia navy during the war. Various towns in colonial America have claimed to be the birthplace of the Stars and Stripes.

Based on colonial folklore, it has also been stated that the American flag was first flown in battle during the Revolutionary War at the Battle of Cooch’s Bridge in 1777. This may also be the stuff of legend.

However, what we do know is this:

The first American flag was designed to represent the 13 original colonies with 13 white stars on a blue field and 13 alternating red and white stripes.

One of the first flag designs had the stars arranged in a circle, based on the idea that all colonies were equal.

In 1818, after a few design changes, the United States Congress decided to retain the flag’s original 13 stripes and add new stars to reflect each new state that entered the union.

Today, there are 50 stars, one for each state in the union, but the 13 stripes remain.

WHEN IS FLAG DAY?

Flag Day, celebrated annually on June 14, is not an official federal holiday, but its observance is traditionally proclaimed each year by the president of the United States. On Flag Day, many towns and cities hold parades and events to celebrate the flag, and the colors are to be flown at all government buildings.

HISTORY OF THE AMERICAN FLAG

WHY IS THE AMERICAN FLAG RED, WHITE, AND BLUE?

The Continental Congress left no record as to why it chose these colors. However, in 1782, the Congress of the Articles of Confederation chose the colors for the Great Seal of the United States with these meanings:

According to the End of the Oregon Trail Interpretive Center, the colors originated with the British flag, which is called the Union Jack and was a combination of the Scottish cross of St. Andrew (white on blue) and the English cross of St. George (red on white) at the time. (The modern British flag also incorporates the Irish cross of St. Patrick into its design.)

Did you know that there is a proper way to fly the American flag? The U.S. Flag Code is an official set of guidelines (not laws) that dictates how a flag should be flown in order to show it the respect and honor that it deserves. Learn all about American Flag Etiquette here and be well prepared to hoist the flag this Flag Day!

WHERE MAY THE AMERICAN FLAG BE FLOWN 24 HOURS A DAY?

The flag is usually taken indoors at night out of respect, but there are some places where flying the flag around the clock is permissible. Do you think you can guess them?

Flag Day is just one of many patriotic celebrations in the United States. For full article - https://www.almanac.com/content/flag-day-celebration-american-flag

Personalized with Your Service Patch and Optional Veterans and Flag Patches